The Government has announced plans to introduce a new UK-wide 1.25% Health and Social Care Levy (the Levy) based on National Insurance Contributions (NICs) for both employees and employers. There will also be an equivalent 1.25% increase on the tax rate applied to dividends.

The Levy will be introduced from April 2022, when NICs for working age employees, employers and the self-employed will increase by 1.25%. The Levy will be administered by HMRC and collected in the same way as NICs – Pay As You Earn and Income Tax Self-Assessment. It will be included on payslips and a generic message could appear on payslips in the next tax year.

From April 2023, once HMRC’s systems are updated, a formal legal surcharge of 1.25% will replace the increase in NICs rates.

Why introduce the Levy?

The Levy is being introduced to address the funding required for health care and long-term reforms to the social care system. The increased taxes will raise almost £36 billion for health and social care over the next three years.

The Levy shares the cost of improving the health and social care systems between individuals and businesses across the UK. Basing the Levy on NICs means that employers will be asked to pay more alongside most employees and the self-employed.

Who does it apply to?

The Levy will apply to the same individuals and income as Class 1 (Employee, Employer) and Class 4 (Self-Employed, including partners) National Insurance, and to the main and higher rates.

From April 2023 onwards, the Levy will also apply to those above State Pension age who are still in employment.

The increase will not apply to Class 2 NICs (the flat rate paid by the Self-Employed with profits above the Small Profits Threshold, which is currently £6,515 per year) or Class 3 NICs.

Impacts of the Levy

According to the Government’s briefing document:

The Employment Allowance, which discounts the smallest businesses’ employer NICs bills by up to £4,000, will also apply to the Levy. As detailed in the Government’s briefing document, this means that around 40% of businesses will not be affected at all by the Levy.

Shares held in ISAs are not subject to dividend tax and, due to the £2,000 tax-free dividend allowance and the personal allowance, around 60 per cent of individuals with dividend income outside of ISAs are not expected to pay any dividend tax or be affected by this change in 2022-23.

Example of the impact of an increase in taxation of dividends

The example below is based on a £35,000 dividend, and assumes that the personal allowance is already utilised elsewhere. 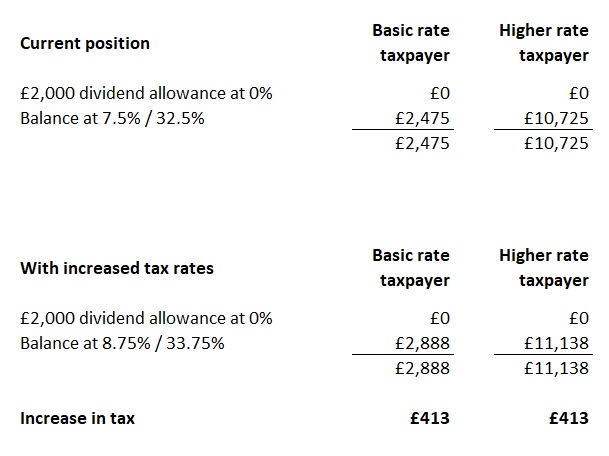 Today (7 September) the Chancellor also launched Spending Review 2021, which will conclude on 27 October 2021 alongside an Autumn Budget and will set out the Government’s spending priorities for the Parliament.

This is the information that is currently available on the new Levy. We will be in touch with further details as soon as they are published. Should you have any queries then please either get in touch with your usual M+A Partners contact or email enquiries@mapartners.co.uk and we will be happy to help.

The temporary 5% reduced rate of VAT to certain supplies relating to hospitality, hotel and holiday accommodation and admission to specific attractions applies until 30 September 2021.

Opportunity for young adults to access their Child Trust Funds as they turn eighteen.

Welcome to our New Trainees

This year we are delighted to have five new trainees across our Accounts, Audit and Tax teams.

The Government have announced plans to introduce a new UK-wide 1.25% Health and Social Care Levy (the Levy) based on National Insurance Contributions (NICs) for both employees and employers.

Furlough Scheme Comes to an End

After supporting a total of 11.6million jobs through its furlough scheme for at least part of its duration, the Coronavirus Job Retention Scheme is due to close on 30 September 2021.